I am used to using Visual Studio for development and really like the IntelliSense, code completion, and file organization it provides and would like to find something (or a combination of tools) that would provide some of this in the Django/Python environment.

I use Eclipse and a plain vanilla PyDev. There isn't any specific Django functionality. The best I came up with was setting up a run profile to run the development web server.

If you add the web tools project (WTP), you'll get syntax highlighting in your templates, but nothing that relates to the specific template language. PyDev is a decent plugin, and if you are already familiar with Eclipse and use it for other projects it is a good way to go.

I recall NetBeans starting to get Python support, but I have no idea where that is right now. Lots of people rave about NetBeans 6, but in the Java world Eclipse still reigns as the king of the OSS IDEs.

There is PyCharm from JetBrains which supports Django and Google Apps. It looks promising.

Note: You need to buy a license for the Professional version if you want Django support. The Community version desn't support Django.

Sublime Text 2 is pretty awesome. It supports a lot of Vim commands if you want them: Vintage Mode

It has a nice package manager: http://wbond.net/sublime_packages/package_control

I use these packages so far:

I still love Vim but ... did I mention that Sublime Text plugins are written in Python? 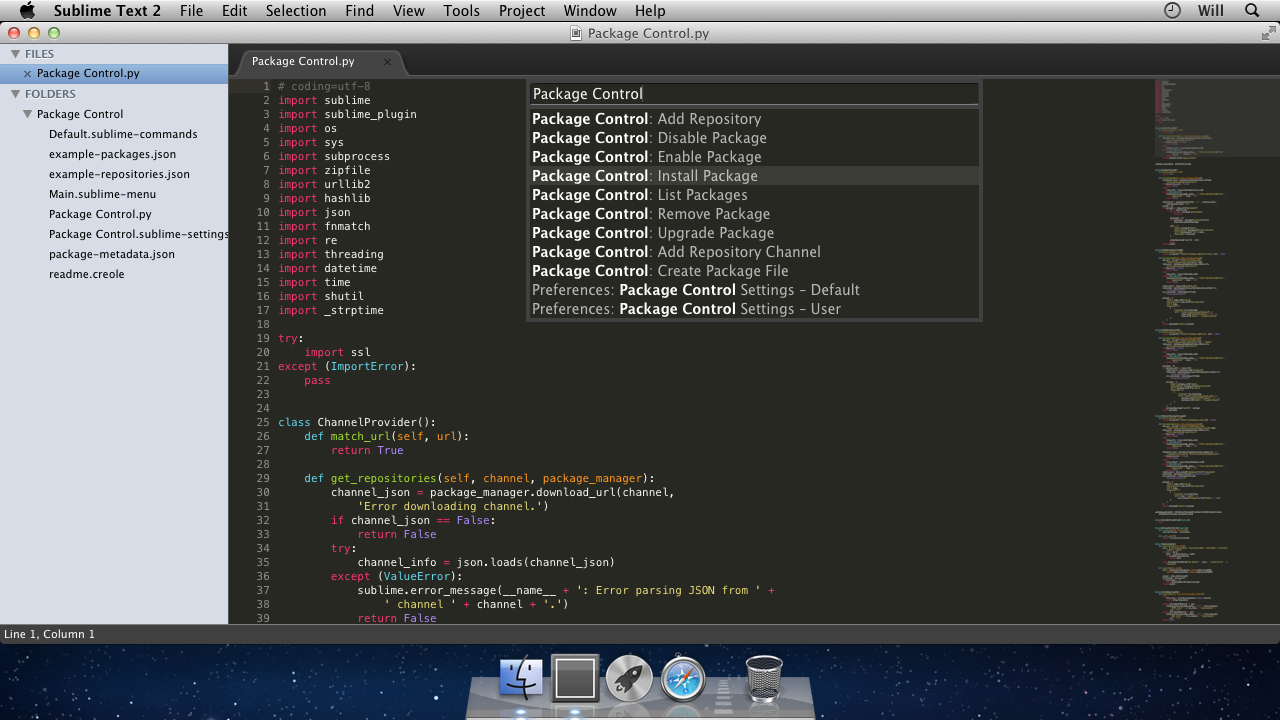 I use Kate (KDE Advanced Text Editor) for most of my development, including Django. It has both a Python and Django Templates syntax higlighting. I switch to Quanta+ when a significant part of the project involves HTML.

Since it uses Kate's KPart, it's just as good for editing the Python parts, and for the HTML templates i have the whole Quanta+ tools, while still highligting Django-specific tags.

Update 2013: Unfortunately, Quanta+ has been dead for years now, and there's no hope that it will ever be resurrected. Also, there's no other usable HTML editor out there, so it's Kate all the time now.

NetBeans for Python is my current favorite (lighter and so much easier to install than Eclipse I found). Supports simple refactoring, autocompletion, errors/warnings...

Wingware Python IDE a commercial IDE, which has some Django-specific project setup features the ability to debug Django template files.

IntelliJ IDEA Ultimate Edition another commercial IDE which has also a plugin for Python that is under heavy development. I saw some demo which look very promising on the auto-completion (for templates and Python).

Vim which I still use a small touch-fix application. See also: Extra tweaks for Django.

PyCharm. It is best the IDE for Python,Django, and web development I've tried so far. It is totally worth the money.

You guys should checkout PyCharm! It is the first decent Django IDE.

Eclipse has the PyDev plugin for python development. Unfortunately, I'm not sure how well it integrates with Django.

As far as I know there is not "an IDE" for Django, but there are some IDEs that support Django right out of the box, specifically the Django syntax for templates.

The name is Komodo, and it has a lot of features, but it's not cheap. If you are not worried about source control or debugging then there is a free version called Komodo Edit.

This is a nice setup if you already use Visual Studio.

Python Tools has been updated. It has built in support for Django now.

PyCharm, definitely. I tried them all (almost), but PyCharm is the one I found most useful for any heavy development.

For simple, one time, scripts I use whatever comes to mind (TextMate, Vim, Emacs, TextWrangler, etc., you name it).

I have used Eclipse with PyDev and PyCharm. PyCharm is definitely the best IDE for Django/Python I have tried. It does proper template highlighting and auto-completion for all objects. It also does cross-file referencing.

It's quite expensive, but definitely the best Django IDE I have tried. You can try a 30 day evaluation at http://www.jetbrains.com/pycharm/download/.

Well, I've been using my own one. Recently they released an alpha version. Here it is at pfaide.com/.

I've also had good results with Eclipse and Pydev. Although I still require a shell opened to the project directory to run manage.py commands. I've also been using it with the Bazaar plugin for revision control and syncing code with the server.

I really like E Text Editor as it's pretty much a "port" of TextMate to Windows. Obviously Django being based on Python, the support for auto-completion is limited (there's nothing like intellisense that would require a dedicated IDE with knowledge of the intricacies of each library), but the use of snippets and "word-completion" helps a lot. Also, it has support for both Django Python files and the template files, and CSS, HTML, etc.

I've been using E Text Editor for a long time now, and I can tell you that it beats both PyDev and Komodo Edit hands down when it comes to working with Django. For other kinds of projects, PyDev and Komodo might be more adequate though.

I use Kate as well. Kate's simplicity is its biggest feature. It doesn't get in your way. (This is of course highly subjective opinion.)

Kate includes a Python code browser plugin. But it isn't useful IMO. No automatic updates when you change the code/view. Also when you update, the whole tree is collapsed, and you have to expand it again yourself. Too many clicks.

Instead, I use the Source Browser plugin that comes with Pâté. It does cause Kate to freeze temporarily sometimes, but no crashes or anything of that sort so far.

If you like Vim as an editor, here are some suggestions on how to tune it (up to the point of a full fledged IDE) for Django development: http://code.djangoproject.com/wiki/UsingVimWithDjango.

Editra supports Django Template Language syntax highlighting. You can configure it either as a better Notepad or a basic IDE.

I made a blog post about NetBeans' new and upcoming support for Django. When paired with its already fantastic Python, JavaScript, HTML and CSS support, it's a strong candidate in my mind!

TextMate with the Django and django-html bundles installed gives you syntax highlighting and great extensibility. It is lightweight and fun to use.

Here is a link to a code completion project for TextMate with Python (which I haven't used myself). As for "intellisense" (which I understand to be inline-doc reference), TextMate has that too.

It has a built in Python shell to run snippets (or select and run) and support for Mercurial/Git, etc. and a built-in unittest/nose/doctest test runner. It's commercial though, but as it is written in Python, it's cross platform.

I bought it a while ago, and thought it looked dorky, but I've tried them all and keep coming back. Caveat that I am a Windows guy with no Emacs or Vim skills, so leveraging that was not an option. And the Mac version requires X Window and seems to be more glitchy.

It is GTK2 based, fast, lightweight, available for Linux and Windows.

I have consistently used Vim or Kate, but I would prefer a full-blown IDE. Given it is not as heavy as Visual Studio.

I like Eclipse + PyDev and/or eric, myself. The new version of PyDev has some pretty awesome code completion support.

Since I only use Eclipse for PyDev, I use a slim install of just the Platform Runtime Binary + PyDev + Subclipse.